Please note that each case is different. The verdicts and settlements described on this web site do not represent what we may obtain for you in your case. No law firm wins all of its cases, and we are no exception. However, our clients tell us that knowing we have obtained positive results for others, by settlement and by jury verdict, is an important consideration in deciding whether to retain our firm. We would be happy to discuss these cases and many more with you.

QUARTER OF A MILLION DOLLAR VERDICT FOR PARKING LOT ACCIDENT

Doug Allston representated a man who tripped over a chain in a parking lot and was awarded $272,924 by a Montgomery County jury. Plaintiff Randy Lapin, age 52, was walking through a parking lot at night to return to his car after frequenting a restaurant. He fell over a dark chain hanging less than a foot off the ground. The chain was draped between two poles which were painted a bright yellow color. (See picture below)

Plaintiff alleged that the chain was (1) unnecessary; (2) too low to the ground to be seen; and (3) too dark to be seen. It was further alleged that the parking lot was poorly lit and poorly designed in that pedestrian traffic should be expected to encounter the chain.

The plaintiff sustained a comminuted humerus fracture of the right arm requiring open reduction and internal fixation. The plaintiff underwent additional surgery to replace the screws. Plaintiff had a 7-inch scar on his upper arm and suffered some loss of extension and flexion. He claimed $22,924 in past medical expenses and no lost wages. 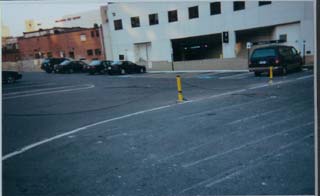 WORKER INJURED ON WORKSITE BY A PIECE OF PLYWOOD LEFT BEHIND 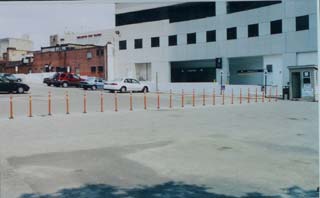 Greg Smith was at work on a windy day. A plumber by trade, he had no idea how his life was about to changes.

As he stepped outside the townhouse where he was installing plumbing fixtures, a huge piece of plywood was picked up by a 40 mph gust of wind, hurled through the air, and struck him on the side of his head. The world went dark for Greg Smith.

Days later, he woke up in the hospital. He had lost a good deal of his hearing in his left ear, and because a nerve had been severed, he could not move the left side of his face.

Two surgeries later, he was better, but not back to normal.

Mr. Smith had a workers’ compensation case because he was injured at work. However, after retaining me, we were also able to pursue a case against the carpentry company that had left the piece of plywood out on a windy day ten days before. After much negotiation, Mr. Allston reached a settlement of $200,000.00 with the insurance company, and Mr. Smith will at least have some financial security for the future.

Plaintiffs names have been changed in order to protect the confidentiality and anonymity of our clients. While these cases are a matter of public record, the law firm of Allston & Associates does not believe that filing a lawsuit necessarily involves the invasion of one’s privacy.